It’s been a whirlwind of activity before, during and after the big spring kickoff NCHA show held at Bonina on March 9-11. Here’s a little event wrap up from Nina, who was so grateful for all of the trainers who came to compete in the Colt To Cow Connection, cutters and the donors and bidders in the Cindy Severe Benefit Auction.

Weekend Highlighted by the Colt To Cow Connection and prime rib dinner at the finals!

The C2C simply fascinated anyone interested in watching how different trainers accomplished things with their colts. Since they were young, the unpredictableness kept us glooed! The colts all had a start by the same trainer, Blaine Davies, so it equalized the opportunity for contestants. 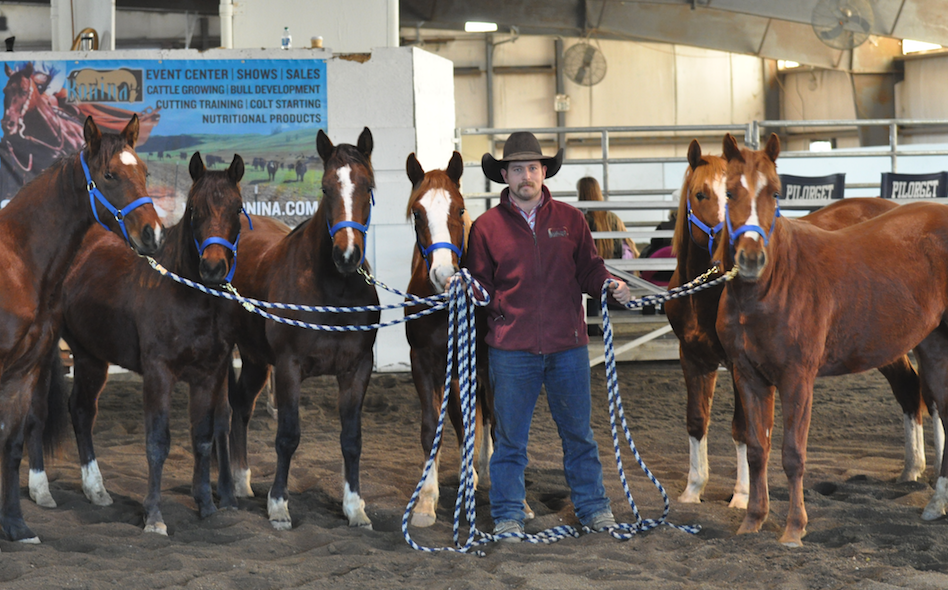 Halahs Hero leaped and bucked with glee when he started after a cow. The trainer, Jeff Bailey, Kennewick, WA did not get after him, just quietly kept working, not punishing him for liking his new job.

BNL Xerxes started pretty quiet and by the finals was tracking a cow around, turning, circling, stopping without Shane Carlon, Whitt, Texas, even picking up his reins.

It was fascinating to watch Diehl Hiner, Walla Walla, WA, put a handle on Little Magic Cat sold in the Benefit Auction for Cindy Severe. Very pretty, this filly willingly learned to bend and move her front end and was eager to work a cow.

PRF Talent In Metal started with the prettiest, most natural stop in the arena. Dusty Whitford, Ferndale, WA, was pleased with his progress picking up and moving his front end.

BNL Tap A Blu Toon was fast, reactive and not always receptive at the beginning. Johnny Hammock, Chiloquin, OR, totally comfortable on her, talked her into going along with his program. She finished strong marking a 75 and earning Johnny the Reserve Championship!

BNL Uranium was rejected by the trainers present at the draw, but taken by Travis Rempel from Abbotsford, BC Canada who arrived late and didn’t see her rough preview. She started out wild, frightened and resistant. Travis used every minute of the 25 minutes allotted for that Go-Round, marking a 75 on Round 1! Next day, that filly started where they left off, continued to progress and marked a 77! In the finals, Travis turned up the showmanship and marked another 77 and took home the Championship buckle!

Very exciting to see the enormous progress made on these colts in 3 days!

The Cindy Severe Benefit auction was a tremendous success.

The beauty of this offering was that the items were in demand by cutters and horsemen! Sold was a cutting practice in Ukiah, OR, a breeding to Highbrow Tuesday, Equine AI service, Noble saddle rack, one month training by Diehl Hiner and Dusty Whitford, carved horse pendant, two colts and more. Josh Dykes, Nine Mile Ranch called the sale.